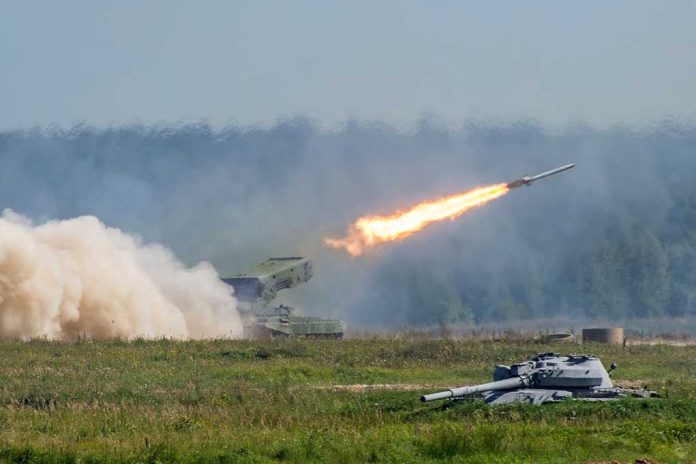 (RepublicanReport.org) – Tensions continue to simmer in the Middle East amid frosty relations between the United States and Iran. Talks around re-establishing the Obama-era Iran nuclear deal, which former President Donald Trump abandoned, are reportedly on rocky ground. Additionally, it appears Iranian forces in the region may be launching attacks on American targets in Iraq.

According to reports from the Iraqi military, a Katyusha rocket hit a base at Baghdad’s international airport in which US troops were staying on Wednesday, January 5. There haven’t been any reports of injuries at this time.

Authorities found a rocket launcher and a single rocket in a residential area of Baghdad following the impact. Iranian-backed militias have reportedly used the neighborhood as a base to fire rockets at the airport in the past.

#UPDATE In the first hints of possible retaliation for a US drone attack that killed a top Iranian commander, mortar rounds hit an area near the US embassy in Baghdad.

Moments later, two rockets slammed into an Iraqi base where US troops are deployedhttps://t.co/M8KlfQQDEE pic.twitter.com/mSPMDcsEBy

This incident follows two attempts at drone attacks on American military personnel earlier in the week. Analysts are speculating; if Iran is indeed behind these attacks, they may be in retaliation for the assassination of General Qasem Soleimani in January 2020. Then-President Donald Trump ordered the assassination over Soleimani’ss reported plans to attack American diplomats in the Middle East, as well as his past operations that killed and injured large numbers of American and allied military personnel.

Will the situation get worse before it gets better?