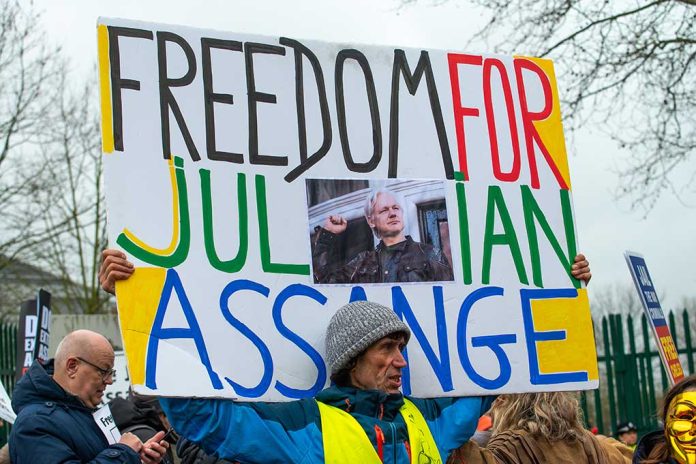 (RepublicanReport.org) – Julian Assange has one of the most instantly recognizable names in global news. His efforts to uncover the secrets of the world’s governments on WikiLeaks, the website he founded, made him a hero in some circles, but it also got him in a lot of legal trouble. The federal government has been chasing Assange for years, and it recently took a step closer to getting its man.

On Wednesday, April 20, a British judge gave the green light for Assange’s extradition to the US to face charges related to alleged spying offenses, according to NPR. Home Secretary Priti Patel must still make the final decision as to whether to send the 50-year-old across the Atlantic to stand trial.

The 18 charges against Assange relate to his alleged cooperation with military whistleblower Chelsea Manning. Prosecutors claim Assange helped Manning to steal classified files and military cables before posting them online. The case against Assange states that the publication of this information puts lives at risk.

Assange has been fighting extradition for a number of years. British district and appeal courts had been at odds over whether to refuse to extradite him on the grounds of the poor treatment he would likely receive in American custody. He’s currently housed in Belmarsh Prison in London, England, following an arrest for skipping bail in 2019.

Assange married Stella Moris in a ceremony inside Belmarsh earlier this year.

Should Assange Be in Jail?

Supporters of the WikiLeaks founder say he was exercising his journalistic freedom (which enjoys protection under the First Amendment) through his work. Some further claim the US government is pursuing him for political reasons related to his work exposing potential wrongdoing by the US during the wars in Iraq and Afghanistan.

The Swedish government previously went after Julian Assange over allegations he had committed sex crimes. However, it eventually dropped the charges, claiming the chase had gone on for too long. Assange escaped the Swedish authorities by remaining in the Ecuadorian embassy in London for a period of seven years.

Should a federal court convict Julian Assange on some or all of the counts facing him, it’s not clear how much prison time he would face. His legal team has estimated he could receive a custodial sentence of up to 175 years, but other officials have indicated it likely won’t be that long.

What do you think about the Julian Assange case? Should he see the inside of an American prison, or were his actions for the good of society?