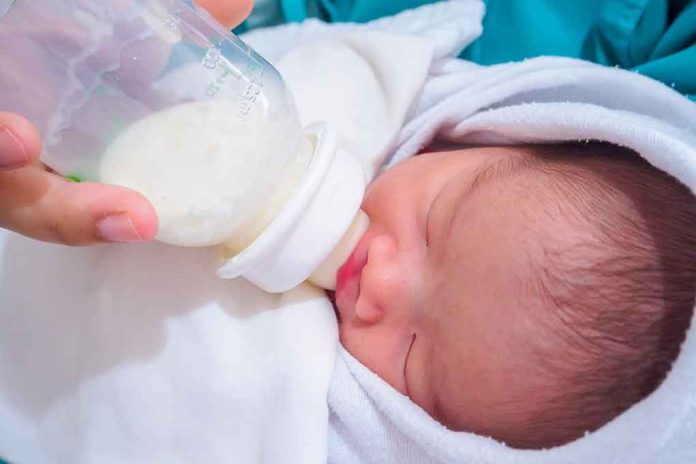 Look What’s Coming To America Amid The SHORTAGE

(RepublicanReport.org) – Over the last number of weeks, the most pressing aspect to the ongoing supply chain crisis has been the shortage of baby formula. Earlier this year, several babies became sick and at least two died, potentially due to unsafe formula, following a contamination incident at a major manufacturing plant. The facility was forced to pause operations, upsetting supply of the vital goods. Last weekend, the Biden administration took a step toward addressing the problem.

On Sunday, May 22, President Joe Biden published the tweet below announcing the imminent arrival of a large shipment of baby formula in the United States. According to a statement from White House Press Secretary Karine Jean-Pierre, the shipment was 78,000 pounds in total and arrived in Indiana on a military plane.

Folks, I’m excited to tell you that the first flight from Operation Fly Formula is loaded up with more than 70,000 pounds of infant formula and about to land in Indiana.

Our team is working around the clock to get safe formula to everyone who needs it. pic.twitter.com/cX4KU0eDtZ

This arrival comes as part of “Operation Fly Formula,” a Biden Administration initiative that will see more such flights arriving in the country over the coming weeks. A Fox report indicated officials expect two more pallets of baby formula to arrive from Europe before the end of this week. President Biden has invoked the Defense Production Act to stimulate levels of domestic production as well.

Do you think the current approach could bring an end to this crisis sooner rather than later?